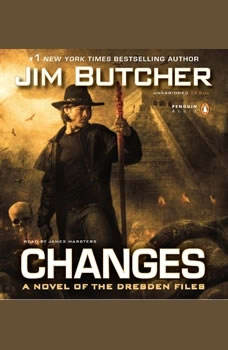 “A can’t-miss entry in one of the best urban-fantasy series currently being published.”—Booklist (starred review)

As Chicago’s only professional wizard, Harry Dresden has faced demons, vampires, werewolves, dark sorcerers, and hosts of horrors from beyond the mortal realm. But nothing could have prepared him for this…

Long ago, Susan Rodriguez was Harry's Dresden’s lover—until she was attacked by his enemies, leaving her caught between humanity and the relentless bloodlust of the vampiric Red Court. She disappeared to South America, where she could fight both her savage gift and those who cursed her with it. Now, she needs Harry’s help more than ever.

For the vengeful Duchess of the Red Court has discovered a secret Susan has long kept from everyone—including Harry—and she plans to use it. To prevail, Harry may have to unleash the full fury of his untapped power—and he may have no choice but to embrace the darkness within himself.

Because this time, he’s fighting to save his child.

Im a Harry Dresden fan and a James Marsters fan, forget the guy who read Ghost Story pale and forgettable imitation honestly, it BOTHERED me that Harry didnt sound like himself. But truth is, I kinda eased into the series, finding a book here, a book there, that were intriguing enough to get me started. Now Im hooked, of course, and sometime in the recent past I added all the earlier volumes to my queue.Consequently, due to lack of attention on my part, I ended up with Ghost Story in my queue ahead of Changes. Bummer. So how good was Changes? Well, good enough that I didnt even THINK about not listening to it, even though I already knew what was going to happen in it. And altho I confess to being an ingrained readaheader I did not skip a word. It was THAT good.I totally understand how Jim Butcher could have 7 years of titles on his website. Hes already written the entire tenthousand page opus. Hes just releasing them to us a book at a time. Its what you do when you have a character who just keeps living you keep writing about him/her. In this case, its not just a character its a whole world, with one foot in reality that makes it almost mundane. An excellent series, and Changes is an important pivot point in it.