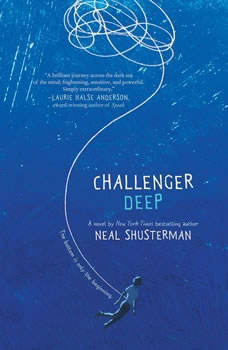 National Book Award and Golden Kite Award WinnerA captivating novel about mental illness that lingers long beyond the last page, Challenger Deep is a heartfelt tour de force by New York Times bestselling author Neal Shusterman.Caden Bosch is on a ship that's headed for the deepest point on Earth: Challenger Deep, the southern part of the Marianas Trench.Caden Bosch is a brilliant high school student whose friends are starting to notice his odd behavior.Caden Bosch is designated the ship's artist in residence to document the journey with images.Caden Bosch pretends to join the school track team but spends his days walking for miles, absorbed by the thoughts in his head.Caden Bosch is split between his allegiance to the captain and the allure of mutiny.Caden Bosch is torn.Challenger Deep is a deeply powerful and personal novel from one of today's most admired writers for teens. Laurie Halse Anderson, award-winning author of Speak, calls Challenger Deep "a brilliant journey across the dark sea of the mind; frightening, sensitive, and powerful. Simply extraordinary."