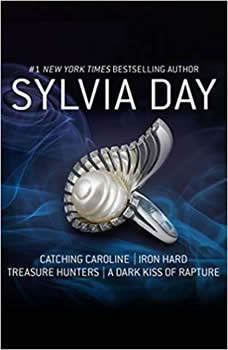 Catching CarolineCan the hunger that thrives in darkness be a love for eternity?Jack Shaw’s reputation as a wicked libertine is well deserved. He lives for the moment, indulging in temporary pleasures. Until he meets Lady Caroline Seton. Now he wants more than one stolen kiss, he wants forever. But Caroline hides a dangerous secret, one that could cost him his life. Will his love be enough to save them both…?Iron HardBaron de la Warren returned from the war a hero, a sky captain lauded for his brilliant strategies and swashbuckling boldness. Savagely beautiful, he is far too masculine to be pretty, but he is certainly magnificent. And irresistibly sexy.Tinkerer Annabelle Waters is startled when his lordship commissions mechanized lovebirds, wondering at the private man who lives beneath the public personage. What manner of warrior thinks of such a lover’s gift? She is more than a little eager to see for herself…Treasure HuntersMercenary/treasure hunter Rick Bronson is ready to hunt down his next treasure–erotic e-books hidden away when erotic romance was banned by the Conservative Censorship Committee. His first order of business is securing the help of literary antiquities expert Samantha Tremain. She’s considered one of the foremost authorities on erotic literature in the galaxy, a veritable bounty of carnal knowledge that Rick intends to enjoy to the fullest.Now two people who couldn’t be more different race across the star system on a daring quest for untold riches. Together, success is within their grasp…if they can just get past the hands-on research.A Dark Kiss of RaptureOf all the Fallen, Raze’s hungers are some of the darkest and most insatiable. His brazen seductions cost him his wings, leaving him soulless and immortal, the most dangerous of seducers. He has roamed the earth for eons, hunting the rogues of his kind and protecting the humans who provide him with blood and sex. He is content with his life and the transient pleasures that flow through it… until one night and one woman change everything.Kimberly McAdams is smart, beautiful, and wealthy. She can have any man she wants, but the moment she sets eyes on the lethally stunning Raze she knows he’s the man she needs. As one searingly erotic night burns into something deeper and far more vital than either of them expected, an adversary from Raze’s past sees a chance for revenge. Twisted by hatred, she will take from Raze what was taken from her—the precious gift of love.