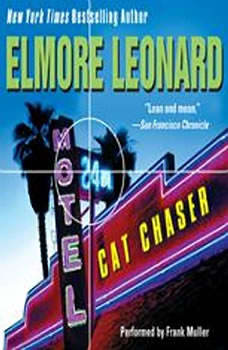 “Cat Chaser is just what one would expect from Elmore Leonard—quirky, peopled with oddball characters…and more twists and turns than a roller coaster.”—Cleveland Plain Dealer“A superior example of gritty writing and violent action.” —New York Times There are numerous reasons why Grand Master Elmore Leonard is considered “the coolest, hottest thriller writer in America” (Chicago Tribune) and “the greatest crime writer of our time, perhaps ever” (New York Times Book Review). Cat Chaser is one of them. A gripping, lightning-paced tale of an ex-soldier-turned Florida motel owner whose dangerous affair with the mistress of a Dominican general in exile—a former death squad leader—threatens to have lethal consequences…especially when drugs, double-cross, and murderous mob thugs are added into the mix. A classic thriller from crime fiction master who first brought us U.S. Marshal Raylan Givens, currently of TV’s Justified, Cat Chaser proves once more that when the true greats of mystery and suspense are mentioned—John D. MacDonald, Dashiell Hammett, James M. Cain, Robert Parker, et al—Elmore Leonard tops the list.

Six months ago, Lucas Davenport tackled his first case as a statewide troubleshooter, and he thought that one was plenty strange enough. But that was before the Russian got killed. On the shore of Lake Superior, a man named Vladimir Oleshev is found...