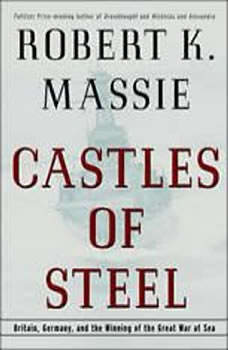 Castles of Steel: Britain, Germany, and the Winning of the Great War at Sea

In a work of extraordinary narrative power, filled with brilliant personalities and vivid scenes of dramatic action, Robert K. Massie, the Pulitzer Prize–winning author of Peter the Great, Nicholas and Alexandra, and Dreadnought, elevates to its proper historical importance the role of sea power in the winning of the Great War.

The predominant image of this first world war is of mud and trenches, barbed wire, machine guns, poison gas, and slaughter. A generation of European manhood was massacred, and a wound was inflicted on European civilization that required the remainder of the twentieth century to heal.

But with all its sacrifice, trench warfare did not win the war for one side or lose it for the other. Over the course of four years, the lines on the Western Front moved scarcely at all; attempts to break through led only to the lengthening of the already unbearably long casualty lists.

For the true story of military upheaval, we must look to the sea. On the eve of the war in August 1914, Great Britain and Germany possessed the two greatest navies the world had ever seen. When war came, these two fleets of dreadnoughts—gigantic floating castles of steel able to hurl massive shells at an enemy miles away—were ready to test their terrible power against each other.

Their struggles took place in the North Sea and the Pacific, at the Falkland Islands and the Dardanelles. They reached their climax when Germany, suffocated by an implacable naval blockade, decided to strike against the British ring of steel. The result was Jutland, a titanic clash of fifty-eight dreadnoughts, each the home of a thousand men.

When the German High Seas Fleet retreated, the kaiser unleashed unrestricted U-boat warfare, which, in its indiscriminate violence, brought a reluctant America into the war. In this way, the German effort to “seize the trident” by defeating the British navy led to the fall of the German empire.

Ultimately, the distinguishing feature of Castles of Steel is the author himself. The knowledge, understanding, and literary power Massie brings to this story are unparalleled. His portrayals of Winston Churchill, the British admirals Fisher, Jellicoe, and Beatty, and the Germans Scheer, Hipper, and Tirpitz are stunning in their veracity and artistry.

Castles of Steel is about war at sea, leadership and command, courage, genius, and folly. All these elements are given magnificent scope by Robert K. Massie’s special and widely hailed literary mastery.

A gripping, brilliantly told tale of the secret and deadly struggle between American national security and the kings of the oceans. At once thrilling and heartbreaking, this is a landmark book of deep, original reporting which could alter forever ho...

With The Last Stand of the Tin Can Sailors and Ship of Ghosts, James D. Hornfischer created essential and enduring narratives about America’s World War II Navy, works of unique immediacy distinguished by rich portraits of ordinary men in extre...

From one of the most distinguished admirals of our time and a former Supreme Allied Commander of NATO, a meditation on leadership and character refracted through the lives of ten of the most illustrious naval commanders in historyIn his acclaimed bo...

Developed specifically for the Vietnam War (and made famous by the 2004 presidential campaign), Swift Boats were versatile craft "big enough to outrun anything they couldn't outfight" but too small to handle even a moderate ocean chop, too loud to s...

This action-packed narrative history of destroyer-class ships begins with destroyers' first incarnation as torpedo boats in 1898 through the last true combat service of the ships in the Vietnam War. Nicknamed "tin cans" or "greyhounds," destroyers w...

No espionage missions have been kept more secret than those involving American submarines. Now, Blind Man's Bluff shows for the first time how the Navy sent submarines wired with self-destruct charges into the heart of Soviet seas to tap crucial un...

In America's new war, the first guns in the fight are special operations forces, including the Navy SEALs, specially trained warriors who operate with precision, swiftness, and lethal force. In the constantly shifting war on terror, SEAL units&mdash...

From the New York Times bestselling author comes the definitive, illustrated history of one of the greatest battles ever fought—a riveting nonfiction chronicle published to commemorate the two-hundreth anniversary of Napoleon's last stand.On ...