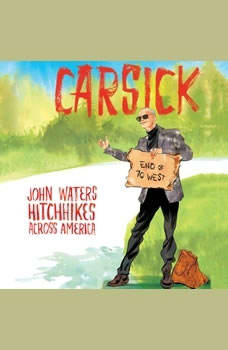 A cross-country hitchhiking journey with America's most beloved weirdoJohn Waters is putting his life on the line. Armed with wit, a pencil-thin mustache, and a cardboard sign that reads "I'm Not Psycho," he hitchhikes across America from Baltimore to San Francisco, braving lonely roads and treacherous drivers. But who should we be more worried about, the delicate film director with genteel manners or the unsuspecting travelers transporting the Pope of Trash?Before he leaves for this bizarre adventure, Waters fantasizes about the best and worst possible scenarios: a friendly drug dealer hands over piles of cash to finance films with no questions asked, a demolition-derby driver makes a filthy sexual request in the middle of a race, a gun-toting drunk terrorizes and holds him hostage, and a Kansas vice squad entraps and throws him in jail. So what really happens when this cult legend sticks out his thumb and faces the open road? His real-life rides include a gentle eighty-one-year-old farmer who is convinced Waters is a hobo, an indie band on tour, and the perverse filmmaker's unexpected hero: a young, sandy-haired Republican in a Corvette.Laced with subversive humor and warm intelligence, Carsick is an unforgettable vacation with a wickedly funny companion—and a celebration of America's weird, astonishing, and generous citizenry.

One of the most acclaimed travel writers of our time turns his unflinching eye on an American South too often overlooked Paul Theroux has spent fifty years crossing the globe, adventuring in the exotic, seeking the rich history and folklore of the f...

This program is read by the author and includes a bonus conversation.No one knows more about everything—especially everything rude, clever, and offensively compelling—than John Waters. The man in the pencil-thin mustache, auteur of the t...

Role Models is filmmaker John Waters's self-portrait told through intimate profiles of favorite personalities—some famous, some unknown, some criminal, some surprisingly middle-of-the-road. From Esther Martin, owner of the scariest bar in Balt...