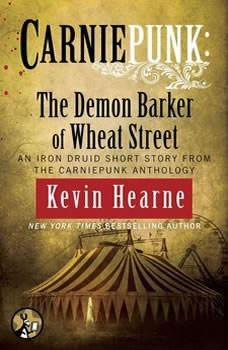 From the New York Times bestselling author of Hounded—“a superb urban fantasy debut” (Publishers Weekly, starred review)—comes an Iron Druid Chronicles short story in the captivating Carniepunk anthology.The ancient Druid Atticus O’Sullivan gets more than greasy corn dogs and flat soda when he visits a carnival in Kansas to which his apprentice, Granuaile, drags him. He runs across a barker with a strange power over the crowd: attractive women leave their men and disappear into an unmarked tent, never to be seen again, and the men wander away, forgetting that they ever had girlfriends or wives. When Granuaile falls under the barker’s influence and enters the tent, Atticus isn’t about to forget it and move on. He and his Irish wolfhound, Oberon, pursue her and discover the horrifying secret to the carnival’s success.