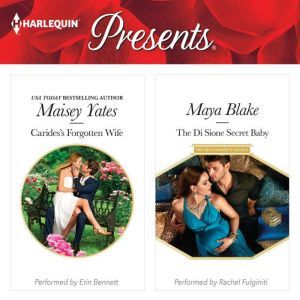 Once forbidden, now for bedding!

Greek billionaire Leon Carides has it all: wealth, power, notoriety, even a wife—though he's never touched his convenient, innocent bride. Then an accident rids this damaged, debauched playboy of his memories…

Leon remembers nothing, except his wife's sparkling blue eyes. Now the desire he feels for Rose overrides the gaps in his past, making her impossible to resist! But when his sins catch up with him, can Rose forgive the mistakes of the man he once was? Or will Leon lose more than just his memory?

"This antique box can be my wedding gift to you."

Charity CEO Allegra Di Sione can't fail in her mission to retrieve her grandfather's beloved box from Sheikh Rahim Al-Hadi, which is why she gets caught in Rahim's sumptuous bedroom trying to steal it!

Seducing the gorgeous sheikh is her only chance at escape! But when Allegra slips away the next morning, she's unaware she now carries something infinitely more precious—and that when Rahim finds out, he'll have no choice but to make his enticing thief his queen!

Book 2 of The Billionaire's Legacy