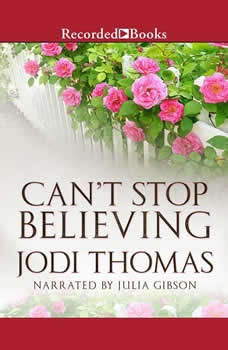 In New York Times bestselling author Jodi Thomas's small town of Harmony, Texas, "there's always something brewing" (Fallen Angel Reviews). Now, a generations-old feud is about to come to a head-and the stakes couldn't be higher with two hearts on the line. Cord McDowell gave up his freedom at eighteen when he went to jail for a crime he didn't commit. Now, ten years later, he's about to give it up again for a piece of land. Nevada Britain, his neighbor, has just made him an offer he can't refuse: If he'll marry her, she'll sign over a section of property that their families have been fighting over for a hundred years. Nevada refuses to explain why, but Cord knows the bargain is in his favor. He just has one condition-she has to sleep in his bed every night for as long as their doomed marriage lasts. Nevada only wants to maintain her family's legacy-and redeem herself for a wrong she did Cord years ago. But as she spends more time with her husband of necessity, she discovers something unexpected-a love so deep it takes her breath away.

In the summer of 1974, Kate Mularkey has accepted her place at the bottom of the eighth-grade social food chain. Then, to her amazement, the “coolest girl in the world” moves in across the street and wants to be her friend. Tully Hart se...

The Comforts of Home
by Jodi Thomas

To the delight of her fans, RITA Award winner and New York Times and USA Today bestselling author Jodi Thomas pens contemporary Western-themed romances set in her native Texas. In The Comforts of Home, a tornado rips through the quiet town of Harmon...

Join Robyn Carr, #1 New York Times bestselling author of the Virgin River and Thunder Point series, as she explores the healing powers of rural Colorado in a brand-new story of fresh starts, budding relationships and one woman's journey to finding t...

THEY’RE BACK…! Sometimes, justice is a long time coming. That’s the case with Julie Wyatt, whose story strikes close to home for the original founder of the Sisterhood, Myra Rutledge, and her best friend — and fellow Sister ...

Just Down the Road
by Jodi Thomas

New York Times best-selling author Jodi Thomas captures listeners’ hearts with her sweet tales set in Harmony, Texas. In Just Down the Road, a rowdy night at the bar lands Tinch Turner in the ER under the care of Dr. Addison Spencer, igniting ...

Justice For AllThe members of the Sisterhood always stand together, and that includes aiding and protecting the men in their lives. Yoko's partner Harry Wong has received a phone call from his old schoolmate Jun Yu. Jun Yu resided at the same temple...