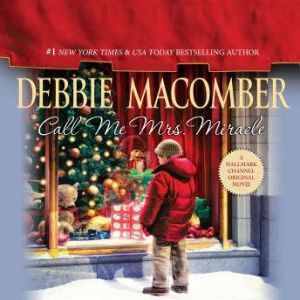 This Christmas, Emily Merkle (call her Mrs. Miracle!) is working in the toy department at Finley’s, the last family-owned department store in New York City. And her boss is none other than…Jake Finley, the owner’s son.For Jake, holiday memories of brightly wrapped gifts, decorated trees and family were destroyed in a Christmas Eve tragedy years before. Now Christmas means just one thing to him—and to his father. Profit. Because they need a Christmas miracle to keep the business afloat.Holly Larson needs a miracle, too. She wants to give her eight-year-old nephew, Gabe, the holiday he deserves. Holly’s widowed brother is in the army and won’t be home for Christmas, but at least she can get Gabe that toy robot from Finley’s, the one gift he desperately wants. If she can figure out how to afford it….Fortunately, it’s Mrs. Miracle to the rescue. Next to making children happy, she likes nothing better than helping others—and that includes doing a bit of matchmaking!This Christmas will be different. For all of them.

This was not as good as the last book. I listened to the book then watched the show and they did not follow the book very much. I thought the show was very boring. I would pass on this one