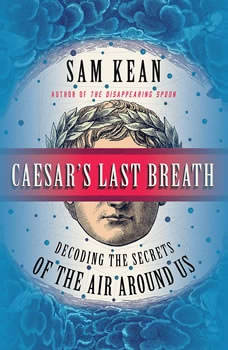 Caesar's Last Breath: Decoding the Secrets of the Air Around Us

The Guardian's Best Science Book of 2017 One of Science News's Favorite Science Books of 2017 The fascinating science and history of the air we breatheIt's invisible. It's ever-present. Without it, you would die in minutes. And it has an epic story to tell.In Caesar's Last Breath, New York Times bestselling author Sam Kean takes us on a journey through the periodic table, around the globe, and across time to tell the story of the air we breathe, which, it turns out, is also the story of earth and our existence on it.With every breath, you literally inhale the history of the world. On the ides of March, 44 BC, Julius Caesar died of stab wounds on the Senate floor, but the story of his last breath is still unfolding; in fact, you're probably inhaling some of it now. Of the sextillions of molecules entering or leaving your lungs at this moment, some might well bear traces of Cleopatra's perfumes, German mustard gas, particles exhaled by dinosaurs or emitted by atomic bombs, even remnants of stardust from the universe's creation.Tracing the origins and ingredients of our atmosphere, Kean reveals how the alchemy of air reshaped our continents, steered human progress, powered revolutions, and continues to influence everything we do. Along the way, we'll swim with radioactive pigs, witness the most important chemical reactions humans have discovered, and join the crowd at the Moulin Rouge for some of the crudest performance art of all time. Lively, witty, and filled with the astounding science of ordinary life, Caesar's Last Breath illuminates the science stories swirling around us every second.

“Riveting . . . [The Vaccine Race] invites comparison with Rebecca Skloot's 2007 The Immortal Life of Henrietta Lacks.”—Nature  “This is a story about the war against disease—a war without end—and the de...

A gripping narrative of nuclear mishaps and meltdowns around the globe, all of which have proven pivotal to the advancement of nuclear science From the moment radiation was discovered in the late nineteenth century, nuclear science has had a rich hi...

We all make mistakes. Nobody’s perfect. Not even some of the greatest geniuses in history, as Mario Livio tells us in this marvelous story of scientific error and breakthrough. Charles Darwin, William Thomson (Lord Kelvin), Linus Pauling, Fre...

James Gleick, the author of the best sellers Chaos and Genius, now brings us a work just as astonishing and masterly: a revelatory chronicle and meditation that shows how information has become the modern era’s defining quality—the blood...

"See for yourself!" was the clarion call of the 1600's. Natural philosophers threw off the yoke of ancient authority, peered at nature with microscopes and telescopes, and ignited the Scientific Revolution. Artists investigated nature with...

The History of Science
by Peter Whitfield

This is the foundation of all: that we are not to imagine or suppose, but to discover what nature does, or may be made to do. Thus did Francis Bacon, early in the 17th century, outline the future of science and technology. This drive for knowledge a...

The Invention of Air
by Steven Johnson

Bestselling author Steven Johnson recounts—in dazzling, multidisciplinary fashion—the story of the brilliant man who embodied the relationship between science, religion, and politics for America’s Founding Fathers. The Invention of...

Panic in Level 4
by Richard Preston

Bizarre illnesses and plagues that kill people in the most unspeakable ways. Obsessive and inspired efforts by scientists to solve mysteries and save lives. From The Hot Zone to The Demon in the Freezer and beyond, Richard Preston’s bestsellin...