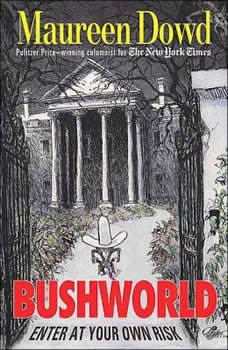 From Washington to Kennebunkport to Texas to old Europe and new Europe, during the past two decades Maureen Dowd has trained her binoculars on the Bush dynasty, putting them, as both 41 and 43 have complained to her, "on the couch." Here she wittily dissects the Oedipal loop-de-loop between father and son and the Orwellian logic of the rush to war in Iraq. It's a turbulent odyssey charting how a Shakespearean cast of regents, courtiers, and neo-con Cabalists-all with their own subterranean agendas-hijack King George II's war on terror and upend the senior Bush's cherished internationalist foreign policy and Persian Gulf coalition.

As she's written about Bushworld, "It's their reality. We just live and die in it.'"

For thirty years, Maureen Dowd has written about Washington-and America-in a voice that is acerbic, passionate, outraged, and incisive. But nothing has engaged her as powerfully as the extraordinary agendas, absurdities, and obsessions of George the Younger. Drawing upon her celebrated columns, with a new introductory essay, she probes the topsy-turvy alternative universe of a group she has made recognizable by their first names, middle initials, nicknames, or numbers-41, the Boy Emperor, Rummy, Condi, Wolfie, Uncle Dick of the Underworld, General Karl, Prince of Darkness (Richard Perle), and her own nickname from W., the Cobra-as they seek an extreme makeover of the country and the world. Bushworld is a book that any reader who cares about the real world won't want to miss.