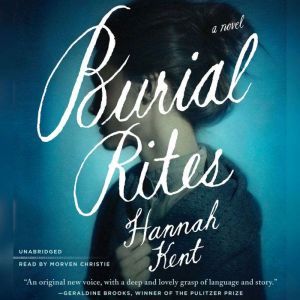 *Soon to be a major motion picture starring Jennifer Lawrence* A brilliant literary debut, inspired by a true story: the final days of a young woman accused of murder in Iceland in 1829.Set against Iceland's stark landscape, Hannah Kent brings to vivid life the story of Agnes, who, charged with the brutal murder of her former master, is sent to an isolated farm to await execution.Horrified at the prospect of housing a convicted murderer, the family at first avoids Agnes. Only TA³ti, a priest Agnes has mysteriously chosen to be her spiritual guardian, seeks to understand her. But as Agnes's death looms, the farmer's wife and their daughters learn there is another side to the sensational story they've heard.Riveting and rich with lyricism, BURIAL RITES evokes a dramatic existence in a distant time and place, and asks the question, how can one woman hope to endure when her life depends upon the stories told by others?

Iceland is a fascinating country to me and I have always wanted to go there. Thanks to Hannah Kent, I was able to travel there, back in time to the 19th century, northern Iceland, and learn a little about their culture and history through her amazing book BURIAL RITES. What an incredible first novel! Ms Kent, whose home is in Australia, visited there lucky! and became interested in a story about a murder where a young woman was executed for murder. Agnes Magusdottir was tried and convicted of murdering her employer and a friend of his. The trial took place in Denmark then she was moved back to Iceland to await her execution in the home of an ***istant district commissioner. The story follows Agnes and her relationship with the family, the young reverend who was ***igned to take care of her spiritual needs and the people of the small rural community. In her conversations with her spiritual advisory we learn about Agnes life,growing up in the area and her relationship with Natan, the man she murdered, and what really happened in that house. Ms Kents writing is so vivid and descriptive I felt like I was right there experiencing everything as an observer set down in this time and place. I could feel the stark landscape, the bitter cold, the smells and sights these country people faced in their daily lives. The characters depicted were so real I could almost touch them. If you are a bit squeamish you might want to skip this book because she spares no detail in the way these people lived and the harsh conditions they lived under. Ms Kent is an amazing talent and I can hardly wait to read what she comes opt with next. I hope it is set in her native land because I have always wanted to visit Australia too!