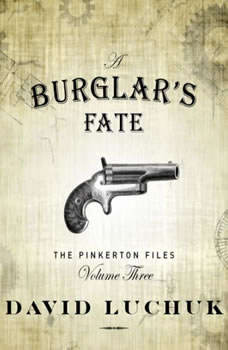 The Pinkerton Files is based on the new audio series starring Battlestar Galactica's Michael Hogan. It sets the real cases of America’s first private detective in a world of radical inventions driving a bitterly divided nation toward civil war.Agency founder Allan Pinkerton senses a conspiracy mounting against him, his sons and his operatives. Every step they take toward solving three seemingly disconnected cases draws them further into a conflict that will be their downfall. If Allan allows them to become embroiled in the war, they will never find their way out.A Burglar’s Fate opens with a bank robbery in a frontier town, a tiny case Allan would normally not take on except that his Agency is falling to pieces. One of his agents has to be rescued from a botched undercover assignment while another disappears into the political intrigue of the capital. His son risks being arrested again to follow clues only he can understand. As the case unravels, Allan faces pressure from the White House to do the one thing he has resisted all along: join the war effort.