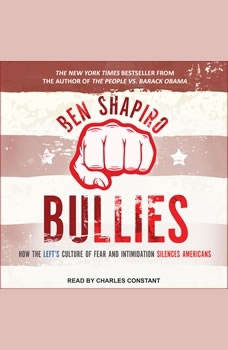 Bullies: How the Left's Culture of Fear and Intimidation Silences Americans

Ben Shapiro uncovers the simple strategy used by liberals and their friends in the media: bully the living hell out of conservatives. Play the race card, the class card, the sexism card. Use any and every means at your disposal to demonize your opposition—to shut them up. Then pretend that such bullying is justified, because, after all, conservatives are the true bullies, and need to be taught a lesson for their intolerance. The left has created a climate of fear wherein ordinary Americans must abandon their principles, back abhorrent causes, and remain silent. They believe America is a force for evil, that our military is composed of war criminals, and that patriotism is the deepest form of treason. They incite riots and threaten violence by playing the race card, then claim they're advocates for tolerance. Disagree with Obama? You must be a racist. They send out union thugs and Occupy Wall Street anarchists to destroy businesses and redistribute the wealth of earners and job creators. No target is off limits as liberal feminists declare war against stay-at-home moms, and gay activists out their enemies, destroy careers, and desecrate personal privacy.

Dear Reader, In February 2013 I gave a speech at the National Prayer Breakfast. Standing a few feet from President Obama, I warned my fellow citizens of the dangers facing our country and called for a return to the prin...

Glenn Beck—author of thirteen #1 New York Times bestsellers—issues a startling challenge to people on both sides of the aisle to give up our addiction to outrage.America is addicted to outrage, we’re at the height of a twenty-year ...