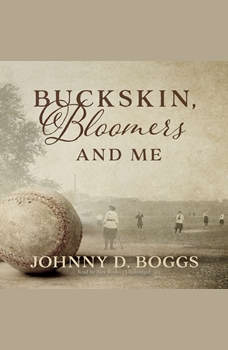 Buckskin, Bloomers, and Me

What’s a sixteen-year-old boy to do when he learns that his stepmother and a local judge have murdered his father and now plan to kill him, too? Well, when it’s 1906, and you can play pretty good second base, you join a barnstorming baseball team making its way across Kansas. It also helps that the team is the Kansas City National Bloomer Girls. After all, who’d look for a runaway boy disguised as a girl on a women’s team that competes against town-ball teams of male players?Of course, it’ll take more than long hair, a Spalding glove, and a quick bat to stay alive. Luckily, another Bloomer Girl, Buckskin Compton, alias Dolly Madison, is on the dodge after some shootings and beatings in Wyoming—and he takes the kid under his tutelage.Staying alive won’t prove easy for either of the reluctant female impersonators as they deal with a budding romance, hitting slumps, a crooked manager, bean balls, drunken teammates, bank robbers, lousy umpires, a revolution for women’s rights, and a rapidly changing Western frontier. Baseball isn’t always fun and games—especially when one bad play might leave the both of you cut from the Bloomer Girls … or just plain dead.In a novel very loosely based on fact (Bloomer Girls teams of mostly women players did barnstorm across the country in the early 1900s), eight-time Spur Award winner Johnny D. Boggs blends America’s pastime with the American frontier. This episodic, tongue-in-cheek adventure showcases what made, and still makes, America and the Wild, Wild West great: Strong heroes. Stronger women. And a good, clean game.