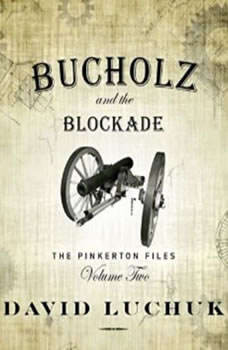 Buchuolz and the Blockade: The Pinkerton Files, Volume 2

The Pinkerton Files is based on the new audio series starring Battlestar Galactica's Michael Hogan. It sets the real cases of America’s first private detective in a world of radical inventions driving a bitterly divided nation toward civil war. Agency founder Allan Pinkerton senses a conspiracy mounting against him, his sons and his operatives. Every step they take toward solving three seemingly disconnected cases draws them further into a conflict that will be their downfall. If Allan allows them to become embroiled in the war, they will never find their way out. Bucholz and the Blockade sees Allan save his son from prison by putting him charge of a murder investigation but this hurried decision evolves into a deadly game of cat-and-mouse as his detectives pursue rogue soldiers into battle and accused killers behind bars. Amid a catastrophe that leaves hundreds dead and agents marooned undercover, Allan loses touch with his son as he chases the most dangerous suspect of all.