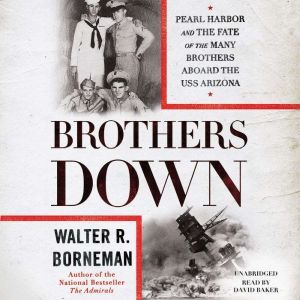 Brothers Down: Pearl Harbor and the Fate of the Many Brothers Aboard the USS Arizona

A deeply personal and never-before-told account of one of America's darkest days, from the bestselling author of The Admirals and MacArthur at War. The surprise attack at Pearl Harbor on December 7, 1941 remains one of the most traumatic events in American history. America's battleship fleet was crippled, thousands of lives were lost, and the United States was propelled into a world war. Few realize that aboard the iconic, ill-fated USS Arizona were an incredible 79 blood relatives. Tragically, in an era when family members serving together was an accepted, even encouraged, practice, sixty-three of the Arizona's 1,177 dead turned out to be brothers. In Brothers Down, acclaimed historian Walter R. Borneman returns to that critical week of December, masterfully guiding us on an unforgettable journey of sacrifice and heroism, all told through the lives of these brothers and their fateful experience on the Arizona. Weaving in the heartbreaking stories of the parents, wives, and sweethearts who wrote to and worried about these men, Borneman draws from a treasure trove of unpublished source material to bring to vivid life the minor decisions that became a matter of life or death when the bombs began to fall. More than just an account of familial bonds and national heartbreak, what emerges promises to define a turning point in American military history.