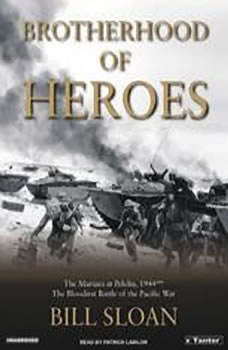 Brotherhood of Heroes: The Marines at Peleliu, 1944-The Bloodiest Battle of the Pacific War

A Band of Brothers for the Pacific, this is the gut-wrenching but ultimately triumphant story of the Marines' most ferocious-yet largely forgotten-battle of World War II. Between September 15 and October 15, 1944, the First Marine Division suffered more than 6,500 casualties fighting on a hellish little island in the Pacific. Peleliu was the scene for one of the most savage struggles of modern times, a true killing ground that has all but been forgotten-until now. Drawing on extensive interviews with Peleliu veterans, Bill Sloan follows the men of K/3/5 and a handful of others throughout the campaign and rescues the Corp's bloodiest battle from obscurity. Misled by poor intelligence, the 9,000 Marine infantry-men who landed on Peleliu's beaches found themselves facing 11,000 Japanese who had turned the island into an intricate network of caves and underground fortifications unrivaled in the history of warfare. Sloan's gripping narrative seamlessly weaves together the experiences of the men who were there, producing a vivid and unflinching look at the nightmare that was Peleliu-a ferocious melee of non-stop infantry attacks, hand-to-hand combat, flame-thrower assaults, and night skirmishes, many in temperatures that topped 115 degrees. With casualties in some infantry units averaging more than sixty percent, Peleliu is the bloodiest battle in the Corps' history. Surprisingly, Peleliu received little public notice back in the States even as it was being fought and was virtually forgotten after the war. At last rectifying this historical injustice, Brother of Heroes will stand with Ghost Soldiers and Flags of Our Fathers as a modern classic in military history as a riveting read.