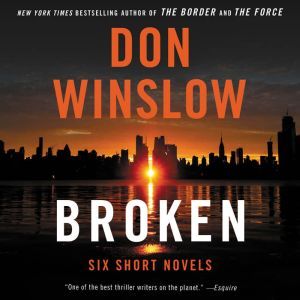 No matter how you come into this world, you come out broken . . .

In six intense short novels connected by the themes of crime, corruption, vengeance, justice, loss, betrayal, guilt and redemption, Broken is #1 international bestseller Don Winslow at his nerve-shattering, heart-stopping, heartbreaking best. In Broken, he creates a world of high-level thieves and low-life crooks, obsessed cops struggling with life on and off the job, private detectives, dope dealers, bounty hunters and fugitives, the lost souls driving without headlights through the dark night on the American criminal highway.

With his trademark blend of insight, humanity, humor, action and the highest level of literary craftsmanship, Winslow delivers a collection of tales that will become classics of crime fiction.