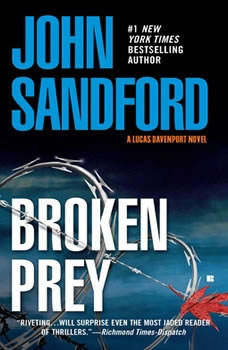 Lucas Davenport confronts a living nightmare, in one of the scariest Prey novels yet from the number-one bestselling author. The "Big Three" are a trio of inmates locked up in the Minnesota Security Hospital over the years, each a particularly vicious serial killer, each with his own distinct style and propensities. Everybody feels much safer knowing that they're behind bars. Except . . . there's a new killer on the loose. And his handiwork bears a disturbing resemblance to some of the finer points practiced by the Big Three, details that never even made the papers. Davenport and his team quickly home in on a possible suspect, a man named Charlie Pope, who was released from the same hospital prison a few weeks earlier, and who now seems to have cut himself free from his court-imposed ankle bracelet and disappeared. But is he really the one? And why do the Big Three look so agitated? Brilliantly suspenseful, consistently surprising-once again, Sandford has outdone himself.""

Jack Reacher hunts the hunter in the third novel in Lee Child’s New York Times–bestselling series. Reacher’s anonymity in Florida is shattered by an investigator who’s come looking for him. But hours after his arrival, the st...