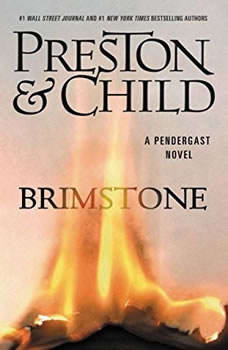 Brimstone: Booktrack Edition adds an immersive musical soundtrack to your audiobook listening experience! * A body is found in the attic of a fabulous Long Island estate.There is a claw print scorched into the wall, and the stench of sulfur chokes the air.When FBI Special Agent Pendergast investigates the gruesome crime, he discovers that thirty years ago four men conjured something unspeakable.Has the devil come to claim his due?Some things can't be undone. *Booktrack is an immersive format that pairs traditional audiobook narration to complementary music. The tempo and rhythm of the score are in perfect harmony with the action and characters throughout the audiobook. Gently playing in the background, the music never overpowers or distracts from the narration, so listeners can enjoy every minute. When you purchase this Booktrack edition, you receive the exact narration as the traditional audiobook available, with the addition of music throughout.

The Dark Half
by Stephen King

Set in the fictional town of Castle Rock, Maine A “wondrously frightening” (Publishers Weekly) tale of terror and #1 national bestseller about a writer’s pseudonym that comes alive and destroys everyone on the path that leads to th...

Set in the fictional town of Castle Rock, Maine The “haunting…tender, intimate book that makes an epic interior journey” (The New York Times), Lisey’s Story is a literary masterpiece—an extraordinarily moving and haunt...

Set in the fictional town of Castle Rock, Maine Stephen King’s #1 national bestseller about a store where Leland Gaunt can sell you whatever your heart desires—sexual pleasure, wealth, power, or even more precious things—but not wi...

"Ninth House is the best fantasy novel I’ve read in years, because it’s about real people. Bardugo’s imaginative reach is brilliant, and this story—full of shocks and twists—is impossible to put down." - Stephen KingThi...

Nevermore… Eager to start their life together, historian Vickie Preston and Special Agent Griffin Pryce take a detour en route to their new home in Virginia and stop for a visit in Baltimore. But their romantic weekend is interrupted when ...

Buried alive… As a teenager, Vickie Preston survived an attack by a serial killer. That was the first time she saw a ghost. Now the city of Boston is being terrorized—someone is kidnapping women and burying them alive, but cruelly lea...

“A high-tech vampire epic....Terrifying.”—San Francisco Chronicle“Part The Andromeda Strain, part Night of the Living Dead.”—Salon.com“Chuck Hogan is known for his taut thrillers, Guillermo del Toro for his...

Paul Gallo saw the report on the news: a mass murderer leading police to his victims' graves, in remote Dread's Hand, Alaska. It's not even a town; more like the bad memory of a town. The same bit of wilderness where his twin brother went missing a...