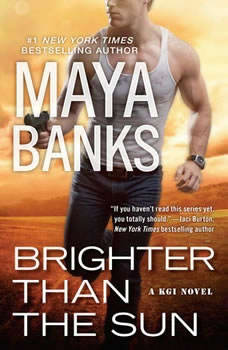 Brighter Than the Sun

Searing action and passion ignite the latest New York Times bestselling KGI novel from the author of Darkest Before Dawn.

As the last unattached member of the Kelly clan, Joe is more than ready to risk life and limb on any mission he’s assigned to, but when it comes to love, he’ll keep his distance. He’s content to watch his brothers become thoroughly domesticated.

Zoe’s had nothing but heartbreak in her life, and she’s determined to start over with a completely new identity, thanks to her college friend, Rusty Kelly. But it’s the gorgeous smile and tender words of Joe Kelly that begin to weaken her resolve to never risk her heart again. And Joe will have to put everything on the line to save Zoe, when secrets of her past resurface—and threaten to tear them apart…

Brighter Than the Sun
A KGI Novel

Softly at Sunrise
A KGI Novel

Shades of Gray
A KGI Novel #6