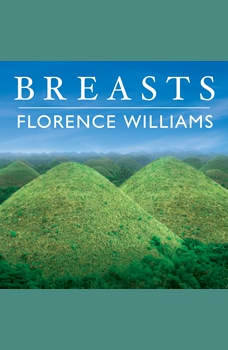 Breasts: A Natural and Unnatural History

Did you know that breast milk contains substances similar to cannabis? Or that it's sold on the Internet for 262 times the price of oil? Feted and fetishized, the breast is an evolutionary masterpiece. But in the modern world, the breast is changing. Breasts are getting bigger, arriving earlier, and attracting newfangled chemicals. Increasingly, the odds are stacked against us in the struggle with breast cancer, even among men. What makes breasts so mercurial—and so vulnerable?In this informative and highly entertaining account, intrepid science reporter Florence Williams sets out to uncover the latest scientific findings from the fields of anthropology, biology, and medicine. Her investigation follows the life cycle of the breast from puberty to pregnancy to menopause, taking her from a plastic surgeon's office where she learns about the importance of cup size in Texas to the laboratory where she discovers the presence of environmental toxins in her own breast milk. The result is a fascinating exploration of where breasts came from, where they have ended up, and what we can do to save them.

How We Die
by Sherwin B. Nuland

Our bones have many stories to tell, if you know how to listen.Bone is a marvel, an adaptable and resilient building material developed over 500 million years of evolutionary history. It gives our bodies their shapes and the ability to move. It grow...

V. S. Ramachandran is at the forefront of his field—so much so that Richard Dawkins dubbed him the "Marco Polo of neuroscience." Now, in a major new work, Ramachandran sets his sights on the mystery of human uniqueness. Taking us to the fronti...

Sleights of Mind
by Sandra Blakeslee

Have you ever wondered how a magician saws a woman in half? Or makes coins materialize out of thin air? Or reads your mind? Magic tricks work because humans have a hardwired process of attention and awareness that is hackable. A good magician uses y...

World renowned scientist Carl Sagan and acclaimed author Ann Druyan have written a Roots for the human species, a lucid and riveting account of how humans got to be the way we are. It shows with humor and drama that many of our key traits--self-awar...

"America's funniest science writer" (Washington Post) takes us down the hatch on an unforgettable tour. The alimentary canal is classic Mary Roach terrain: the questions explored in Gulp are as taboo, in their way, as the cadavers in Stiff and every...

Bill Bryson, bestselling author of A Short History of Nearly Everything, takes us on a head-to-toe tour of the marvel that is the human body. As addictive as it is comprehensive, this is Bryson at his very best, a must-read owner's manual for everyb...

Self Comes to Mind
by Antonio Damasio

The arrival of neurons and their unique ability to transmit and receive messages was the radical break in the course of the human brain’s evolution. This led to the development of the self. Neurons organize themselves in complex circuits and n...

Everything from neurons to consciousness in the blink of an eye (which takes 300 milliseconds).Take a "fantastic voyage" through the whorls and curves of the human brain, no miniaturization required. Learn everything from how quickly you can possibl...