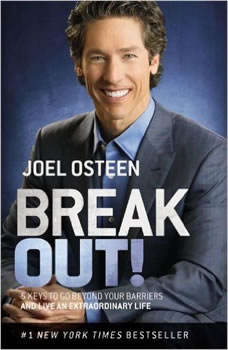 Break Out!: 5 Keys to Go Beyond Your Barriers and Live an Extraordinary Life

We were not created to just get by with average, unrewarding or unfulfilling lives. God created us to leave our marks on our generations. Every person has seeds of greatness planted within by the Creator. When life weighs upon us, pushing us down, limiting our thinking, labeling us in negative ways, we have what it takes to overcome and rise above into the fullness of our destinies. In his dynamic, inspiring and faith-building new book, BREAK OUT: Five Ways To Go Beyond Your Barriers and Live an Extraordinary Life, best-selling author Joel Osteen provides practical steps and encouragement for creating a life without limitations. This book will help readers break out and break free so they can believe bigger, increase their productivity, improve their relationships and accomplish their dreams. Osteen's uplifting message focuses on moving beyond barriers by:Daring to believe that the best will happen for usAdopting an irrepressible "break out" attitudeMaking room for increasePraying bold prayersFollowing God's plan beyond our circumstances Filled with faith and inspiration, BREAK OUT challenges readers to have a new perspective, to let nothing hold them back, and to reject any labels that might limit them. Osteen inspires and encourages with the message that our first break outs must occur within our own minds: "When you break though in your mind, believing you can rise higher and overcome obstacles, then God will unleash the power within that will enable you to go beyond the ordinary into the extraordinary life you were designed to live."

The same God who leads us to green pastures guides us through the valleys. #1 New York Times bestselling author Joel Osteen shares how God uses the darkness in life for good.All of us will go through dark times that we don't understand: a difficult...

Bestselling author Joel Osteen shares how reprogramming your thoughts to remove negativity will lead to a more blessed, fulfilled life. Your mind has incredible power over your success or failure. THINK BETTER, LIVE BETTER offers a simple yet lif...

<p>OVER 500,000 COPIES SOLD! </p><p>In these pages, New York Times bestselling author Shauna Niequist invites you to consider the landscape of your own life, and what it might look like to leave behind the pressure to be perfect a...

#1 New York Times best-seller with more than 11 million copies sold and Amazon’s #17 best-selling book of all time. Heaven Is for Real was the best-selling non-fiction book of 2011 as reported by Nielsen’s Bookscan, and it was made in to...

Joel Osteen, #1 bestselling author and pastor of Lakewood Church, invites you to set aside the shortcomings of the past and step into a new level of victory and favor.Many of us have let our minds become conditioned to thinking we've reached our li...

Can two words give you the power to change your life? Yes they can! In the pages of his new book, bestselling author Joel Osteen shares a profound principle based on a simple truth. Whatever follows the words "I am" will always come looking for you...

She lost her arm in a shark attack and nearly died, but she never lost her faith. Now a major motion picture,&#160;Soul Surfer&#160;is the moving story of Bethany Hamilton&#8217;s triumphant return to competitive surfing and has continue...

In her new book, New York Times bestselling author Joyce Meyer explores a life lived in complete and total dependence on God. Drawing on her own experiences and inspiration from the Word of God, Joyce makes the case that in every area of your life-...

Internationally renowned Bible teacher Joyce Meyer draws on her own history of abuse to show women how Christ's redeeming love heals emotional wounds and brings joy to life.Can a woman who has been deeply hurt by life's circumstances be healed, ...