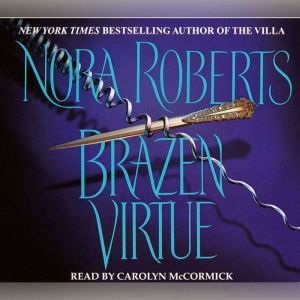 From Nora Roberts, the #1 New York Times bestselling author of The Villa and Carolina Moon, comes a classic tale — a searing novel of twisted passion and lethal cunning, available in hardcover for the first time.

Superstar mystery novelist Grace McCabe needs to unwind after a grueling book tour, and visiting her sister, whom she hasn't seen in months, seems the perfect solution. But Grace is surprised to find the fastidious Kathleen living in a grungy Washington, D.C., neighborhood. Kathleen, reeling from a bitter divorce and the loss of her son, is saving every penny of her teacher's salary to hire a hotshot lawyer for a custody battle.

Then Grace discovers that Kathleen is boosting her income with an unlikely profession: as an at-home phone-sex operator. Known as Desiree to the clients of Fantasy, Inc., Kathleen is living life on the edge. Yet how dangerous could it really be? With the ironclad anonymity the agency guarantees its employees, could anyone ever track her down?

Grace finds out one cherry-blossom-scented night when she comes home to find her sister dead, strangled with the cord of her "special" phone. Suddenly Grace's life turns into a scene from one of her own books — the horror, the tight-lipped police, the shattered survivor. Only this time the survivor is Grace herself.

But she isn't waiting around for the police to catch up with the killer. Instead she creates a daring trap to lure the killer to her. Her plan goes against every coolheaded instinct of Detective Ed Jackson, the lead investigator on the case. He's read all of Grace's books and might have been the perfect consultant for the one she's working on, though in this real-life murder, she's the last complication he needs.

He's determined to keep Grace out of harm's way, but it's too late. Her trap has already worked. She has aroused the attention of a brilliant madman, and now nothing may be able to protect her from the murderous lust that drives this killer down a path of ecstasy laced with death.

A bit different than her usual story line, but still a winner in my eyes.