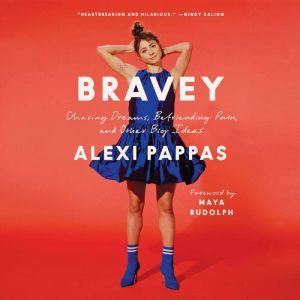 In Bravey, multi-hyphenate talent Alexi Pappas reflects on her career as an Olympic athlete, actor, and writer. She shares her disarming and honest personal story through the touchstone moments of her life, starting with her search for female role models as a young girl after her mother's death by suicide.

Reflective, unflinching, often exuberant, and always entertaining, Bravey showcases Pappas's signature, charming voice. She faces obstacles with optimism and finds the dark moments as important to her process as the breakthroughs, from high school awkwardness to post-Olympic depression, offering valuable wisdom on the benefits of embracing what hurts, both physical and emotional. Pappas's experiences reveal how anyone can overcome hardship, befriend pain, celebrate victory, relish the loyalty found in teammates, and claim joy. In short: how anyone can be a bravey.

Bravey, noun: someone who replaces can't with maybe and pursues her dreams no matter what obstacles appear to stand in her way. A bravey knows that nerves mean you care. A bravey writes down her goals so that what then she achieves them, she remembers she was brave enough to want them in the first place. A bravey doesn't always feel brave, but she knows she is always enough.