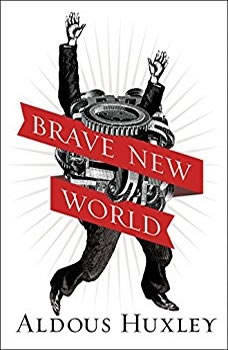 Originally published in 1932, this outstanding work of literature is more crucial and relevant today than ever before. Cloning, feel-good drugs, antiaging programs, and total social control through politics, programming, and media-has Aldous Huxley accurately predicted our future? With a storyteller's genius, he weaves these ethical controversies in a compelling narrative that dawns in the year 632 AF (After Ford, the deity). When Lenina and Bernard visit a savage reservation, we experience how Utopia can destroy humanity.A powerful work of speculative fiction that has enthralled and terrified readers for generations, Brave New World is both a warning to be heeded and thought-provoking yet satisfying entertainment. A USA Today bestseller. #5 on the Modern Library's 100 Best English-Language Novels of the Twentieth Century list. An Entertainment Weekly "Must Read" If You Love Westworld.

Nominated as one of America’s best-loved novels by PBS’s The Great American Read. THE QUINTESSENTIAL NARRATIVE OF THE LOST GENERATION The Sun Also Rises is one of Ernest Hemingway's masterpieces and a classic example of his spare but po...