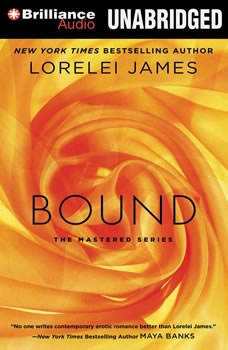 In the Mastered Series by New York Times bestselling author Lorelei James, a woman’s desire to shatter her inhibitions leaves her unprepared for where that erotic journey will take her….Former small-town girl Amery Hardwick is living her dream as a graphic designer in Denver, Colorado. She’s focused on building her business, which leaves little time for dating—not that she needs a romantic entanglement to fulfill her. When her friend signs up for a self-defense class as part of her recovery after an attack, Amery joins her for support. That’s where she meets him.Ronin Black, owner of the dojo, is so drawn to Amery that he takes over her training—in public and in private. The enigmatic Ronin pushes Amery’s boundaries from the start, and with each new tryst, Amery becomes addicted to the pleasure and to him. But when Amery senses Ronin is hiding something, she questions her total trust in him, despite the undeniable thrill of his possession….Praise for Lorelei James:“To die for!” —New York Times bestselling author Maya Banks“Sweet, seductive, and romantic.” —New York Times bestselling author Jaci Burton“Scorchingly hot, wickedly naughty.” —Lacey Alexander, author of Give In to Me

Turn and Burn
by Lorelei James

Tanna Barker is a world champion barrel racer. But her personal life has been less of a success, and she's feeling adrift. After her mother's unexpected death, her father has remarried and sold the Texas ranch she called home. Now a rodeo injury has...