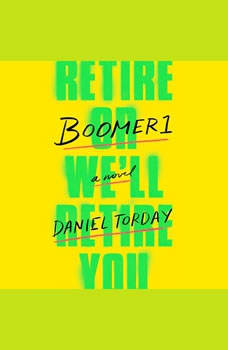 "Torday is a singular American writer with a big heart and a real love for the world. He has the rare gift for writing dynamic action scenes while being genuinely funny." —George Saunders, New York Times bestselling author of Lincoln in the BardoThis program is read by Maggie Siff, acclaimed star of Mad Men, Billions, and Sons of Anarchy.Bluegrass musician, former journalist and editor, and now PhD in English, Mark Brumfeld has arrived at his thirties with significant debt and no steady prospects. His girlfriend Cassie—a punk bassist in an all-female band, who fled her Midwestern childhood for a new identity—finds work at a “new media” company. When Cassie refuses his marriage proposal, Mark leaves New York and returns to the basement of his childhood home in the Baltimore suburbs. Desperate and humiliated, Mark begins to post a series of online video monologues that critique Baby Boomers and their powerful hold on the job market. But as his videos go viral, and while Cassie starts to build her career, Mark loses control of what he began—with consequences that ensnare them in a matter of national security. Told through the perspectives of Mark, Cassie, and Mark’s mother, Julia, a child of the '60s whose life is more conventional than she ever imagined, Daniel Torday's Boomer1 is timely, suspenseful, and in every line alert to the siren song of endless opportunity that beckons and beguiles all of us.More praise for Boomer1:"Torday writes exquisitely about our hallucinatory simultaneous realities, where lives are conducted onscreen and offline, networked to millions of strangers and tremendously alone.” -- Karen Russell, author of Swamplandia!"Daniel Torday’s Boomer1 is a wild, wickedly funny, and deeply empathetic look at modern American culture and politics. Sometimes he’s writing cutting satire, sometimes he’s writing Greek tragedy, and sometimes he’s just writing passages of staggering beauty, but he’s always a brilliantly compelling and necessary voice in these strange, troubling times." -- Phil Klay, National Book Award winning author of RedeploymentThis program features bonus music recorded by Dr. Dog and produced by Zach Miller.