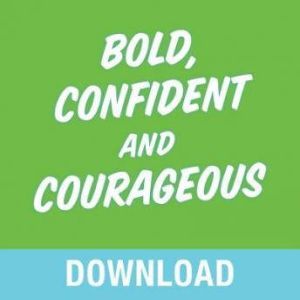 Bold, Confident & Courageous: You Can Live Free from the Grip of Fear and Do It Afraid

When the Lord tells us to “fear not,” it doesn’t mean we won’t ever feel fear. It means, with God’s help, we don’t have to allow fear to stop us! We can keep moving forward…even if we have to “do it afraid.”

Are you ready to conquer your fears and leave insecurities behind? If so, this five-part series by Joyce, including special teachings from Ed Young and Lisa Bevere, will help you walk step by step into a bold, fulfilling new life.

You will learn how to…

Overcome past failures and trust God to try again

Face your fears head-on and, if need be, do it afraid

Obey God in the face of fear

Don’t let anything hold you back! These special teachings will help you to trust the Lord in the face of fear...and step out into the amazing future God has for you.