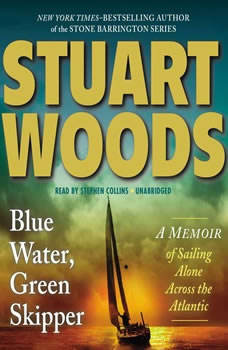 Blue Water, Green Skipper: A Memoir of Sailing Alone Across the Atlantic

Stuart Woods had never owned more than a dinghy before setting out on one of the world’s most demanding sea voyages, navigating single-handedly across the Atlantic. How, at the age of thirty-seven, did this self-proclaimed novice go from small ponds to the big sea?

Now with a new afterword that looks back at how one transatlantic race changed his life, Woods takes readers on a spectacular journey not just of traveling across the world, but
of being tried in fire, learning by accepting challenges, appreciating the beauty of the open water, and living to tell about it.

Below the Belt
by Stuart Woods

A Delicate Touch
by Stuart Woods

Fast and Loose
by Stuart Woods