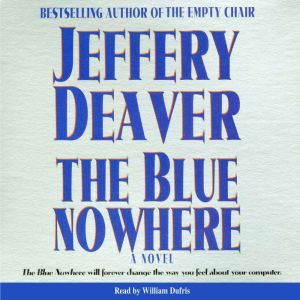 Jeffery Deaver, bestselling author of The Empty Chair and The Bone Collector, now turns to the labyrinthine world of cyberspace -- a world where the most powerful can lose their wealth, their minds, their lives with a hacker's touch of a button. When a sadistic hacker, code-named Phate, sets his sights on Silicon Valley, his victims never know what hit them. He infiltrates their computers, invades their lives, and lures them to their deaths. To Phate, each murder is like a big, challenging computer hack: every time he succeeds, he must challenge himself anew -- by taking his methodology to a higher level, and aiming at bigger targets. Desperate, the head of The California State Police Computer Crimes Division frees Wyatt Gillette, imprisoned for hacking, to aid the investigation -- against the loud protests of the rest of the division. With an obsession emblematic of hackers, Gillette fervently attempts to trace Phate's insidious computer virus back to its source. Then Phate delivers a huge blow, murdering one of the division's own -- a "wizard" who had pioneered the internet -- and the search takes on a zealous intensity. Gillette and Detective Frank Bishop -- an old-school homicide cop who's accustomed to forensic sleuthing -- make an uneasy team. But with a merciless and brilliant killer like Phate in their crosshairs, and his twisted game reaching a fever pitch, they must utilize every ounce of their disparate talents to stop him.

Wyatt Gillette, hacker extraordinaire, is temporarily released from prison to help in a murder investigate with the California State Police Computer Crimes Unit CCU. Serial killer, Phate, is also a very gifted hacker who has left reality behind and is bringing a computer game to the real world. THe idea of the game is to kill as many people as possible in a weeks time. The only catch is that the people must be very secure and basically untouchable. As each kill is completed, the next victim must be harder to access. Wyatt, Frank Bishop homicide detective, and a small crew of CCU computer geeks, as well as, a few other detectives are working 24/7 to track and trace this brutal serial killer. Phate though totally nuts is a brilliant tactician. He feints one way false clues and strikes the other way. He has thir entire team stepping, fetching and tripping over their own feet. Simply spectacular! Jeffery Deaver has written a masterpiece along the lines of Dan Brown's [book:Digital Fortress11125] though the language is dummed down for us laymen. The intrigue is spellbinding which makes this book difficult to put down. The in depth computer speak hackers language bogs it down some but I found that this info isn't necessary to solving the mystery and skipped quite a bit of it. Great book.