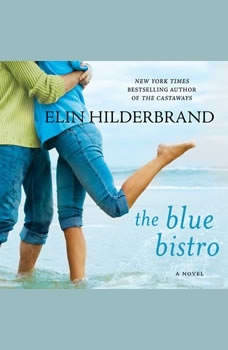 Elin Hilderbrand, author of the enchanting Summer People and The Beach Club, invites you to experience the perfect getaway with her sparkling new novel.Adrienne Dealey has spent the past six years working for hotels in exotic resort towns. This summer she has decided to make Nantucket home. Left flat broke by her ex-boyfriend, she is desperate to earn some fast money. When the desirable Thatcher Smith, owner of Nantucket's hottest restaurant, is the only one to offer her a job, she wonders if she can get by with no restaurant experience. Thatcher gives Adrienne a crash course in the business...and they share an instant attraction. But there is a mystery about their situation: what is it about Fiona, the Blue Bistro's chef, that captures Thatcher's attention again and again? And why does such a successful restaurant seem to be in its final season before closing its doors for good? Despite her uncertainty, Adrienne must decide whether to open her heart for the first time, or move on, as she always does.Infused with intimate Nantucket detail and filled with the warmth of passion and the breeze of doubt, The Blue Bistro is perfect summer reading.

A Summer Affair
by Elin Hilderbrand

She's the perfect wife and mother--and he's the perfect temptation in this "perfect summer cocktail of sex, sun, and scandal" (Kirkus Reviews).Claire has a problem with setting limits. All her life she has taken on every responsibility, assumed eve...

Sundays at Tiffany's
by James Patterson

As a little girl, Jane has no one. Her mother Vivienne Margaux, the powerful head of a major New York theater company has no time for her. But she does have one friend--Michael--and no one can see him but her. But Michael can't stay with Jane for...

Along Came Trouble
by Sherryl Woods