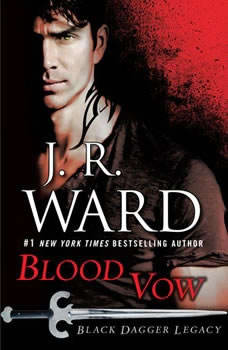 NEW YORK TIMES BESTSELLER • J. R. Ward returns with an all-new tale of paranormal passion in the world of the Black Dagger Brotherhood.

The Black Dagger Brotherhood continues to train the best of the best to join them in the deadly battle against the Lessening Society. Among the new recruits, Axe proves to be a cunning and vicious fighter—and also a loner isolated because of personal tragedy. When an aristocratic female needs a bodyguard, Axe takes the job, though he’s unprepared for the animal attraction that flares between him and the one he is sworn to protect.

For Elise, who lost her first cousin to a grisly murder, Axe’s dangerous appeal is enticing—and possibly a distraction from her grief. But as they delve deeper into her cousin’s death, and their physical connection grows into so much more, Axe fears that the secrets he keeps and his tortured conscience will tear them apart.

Rhage, the Brother with the biggest heart, knows all about self-punishing, and he wants to help Axe reach his full potential. But when an unexpected arrival threatens Rhage and Mary’s new family, he finds himself back in the trenches again, fighting against a destiny that will destroy all he holds most dear.

As Axe’s past becomes known, and fate seems to be turning against Rhage, both males must reach deep—and pray that love, rather than anger, will be their lantern in the darkness.

“Packed with quietly gut-wrenching emotions, healing and sacrifice.”—Under the Covers

The King
by J.R. Ward

J.R. Ward's # 1 New York Times bestselling Black Dagger Brotherhood continues as a royal bloodline is compromised by a grave threat to the throne.Long live the King… After turning his back on the throne for centuries, Wrath, son of Wrath, fina...

Rhage and Mary return in a new novel of the Black Dagger Brotherhood, a series “so popular, I don’t think there’s a reader today who hasn’t at least heard of [it]” (USA Today).   Nothing is as it used to be for th...

As the vampire warriors defend their race against their slayers, one male’s loyalty to the Black Dagger Brotherhood will be tested in this breathtaking novel in J. R. Ward’s #1 New York Times bestselling paranormal romance series. ...

Payne, twin sister of the Black Dagger Brother Vishous, suffers a devastating injury, and brilliant human surgeon Manuel Manello is called in to save her. Their attraction is instant, and as powerful as it is dangerous. But as human and vampire w...

The Chosen
by J.R. Ward

Lover At Last
by J.R. Ward