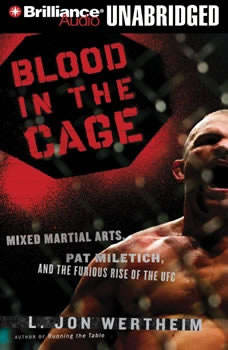 Blood in the Cage: Mixed Martial Arts, Pat Miletich, and the Furious Rise of the UFC

Based on unique access to the Ultimate Fighting Championship (UFC) and its rival organizations, Blood in the Cage peers through the chain-link Octagon into the frighteningly seductive world of mixed martial arts, which has exploded in popularity despite resistance. Wertheim focuses on Pat Miletich, who runs the most famous MMA training school in the world. Single-handedly Miletich has transformed a gritty town on the banks of the Mississippi into an unlikely hotbed for his sport. He has also transformed many an average Joe into a walking weapon of destruction. Wertheim intertwines Miletich’s own life story, by turns tragic and triumphant, with the larger story of the incredible rise of the UFC, from its controversial, back alley roots to the fastest growing sports enterprise in America. For fans of Jeff MacGregor’s Sunday Money and Sam Sheridan’s A Fighter’s Heart, Blood in the Cage takes readers behind the scenes, right down to the mat, from a punch in the kidney to the ping of the cash register, as Wertheim brilliantly exposes the no-holds-barred reality of the blood sport for a new generation. Advance Praise for Blood in the Cage: “In Blood in the Cage, L. Jon Wertheim tells the story of Pat Miletich, the consummate professional athlete turned world-class trainer. Miletich is someone for whom I have considerable respect and admiration and who puts his athletes and our sport first and foremost.” – Randy Couture, UFC champion

Can I See your Hands
by Dr. Gav Schneider

The Way of the Fight
by Georges St-Pierre

The Warrior Diet
by Ori Hofmekler