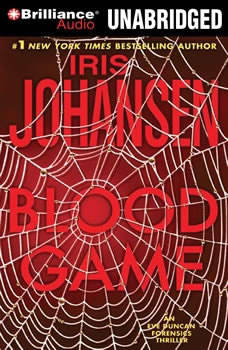 All it takes is one drop of blood...When a Georgia senator’s daughter is found murdered, and her body drained of blood, Eve enters the world of a serial murderer—a twisted psychopath whose name is on Eve’s shortlist of killers who might know something about her missing daughter, Bonnie.To whet a killer’s appetite...But when Eve receives a terrifying calling card in the form of a single goblet of blood, she knows the taunting is over...and the games have begun. As Eve and the killer engage in a dance of death, Eve has no choice but to call upon those she loves and trusts the most—Joe Quinn and Jane MacGuire—even if it means putting them in the path of someone whose bloodlust cannot be quenched.And draw Eve Duncan into his web....Eve believes this psychotic mind holds the answers to the questions that have tormented her for years. And she’ll do almost anything to get these answers. Like a spider hunting his prey, this killer will wait for the perfect moment to strike—the moment when Eve least expects it. And when she has the most to lose...