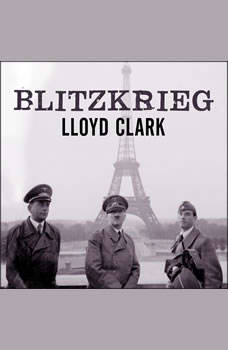 In the spring of 1940, the Germans launched a military offensive in France and the Low Countries that married superb intelligence, the latest military thinking, and new technology. It was a stunning victory, altering the balance of power in Europe in one stroke, and convincing the entire world that the Nazi war machine was unstoppable. But as Lloyd Clark, a leading British military historian and academic, argues much of our understanding of this victory, and blitzkrieg itself, is based on myth. Far from being a foregone conclusion, Hitler's plan could easily have failed had the Allies been even slightly less inept or the Germans less fortunate. The Germans recognized that success depended not only on surprise, but on avoiding being drawn into a protracted struggle for which they were not prepared. And while speed was essential, 90% of Germany's ground forces were still reliant on horses, bicycles, and their own feet for transportation. There was a real fear of defeat. Their surprise victory proved the apex of their achievement; far from being undefeatable, the France 1940 campaign revealed Germany and its armed forces to be highly vulnerable.