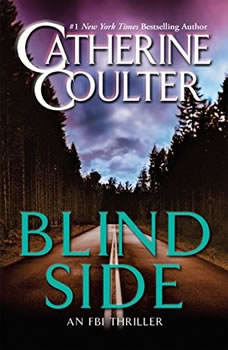 Catherine Coulter’s fast-paced FBI novels featuring married agents Lacey Sherlock and Dillon Savich have rocketed up the New York Times bestseller lists and garnered millions of fans. Coulter’s heady blend of action and intrigue, her “complex plotting and likable characters” (Publishers Weekly), grow more intoxicating with each book—and reach new heights in Blindside.When six-year-old Sam Kettering is kidnapped and then manages to save himself, Savich and Sherlock join his father—former FBI agent Miles Kettering—to determine why Sam would be abducted and brought to eastern Tennessee. Though the local sheriff, Katie Benedict, catches up with Sam before the kidnappers do, the case isn’t over—not by a long shot.The unanswered question is: Why do the kidnappers want this little boy so badly? The investigation leads Savich and Sherlock to a charismatic, intense evangelist, Reverend Sooner McCamy, and his enigmatic wife. As if the kidnapping case weren’t enough, Savich and Sherlock are at the same time desperate to locate the killer of three teachers in Washington, D.C.