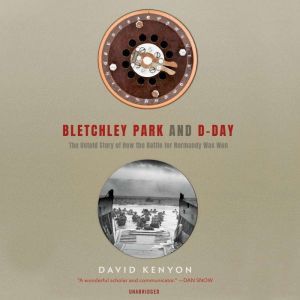 Bletchley Park and D-Day: The Untold Story of How the Battle for Normandy Was Won

The untold story of Bletchley Park's key role in the success of the Normandy campaign Since the secret of Bletchley Park was revealed in the 1970s, the work of its codebreakers has become one of the most famous stories of the Second World War. But cracking the Nazis' codes was only the start of the process. Thousands of secret intelligence workers were then involved in making crucial information available to the Allied leaders and commanders who desperately needed it. Using previously classified documents, David Kenyon casts the work of Bletchley Park in a new light, as not just a codebreaking establishment but as a fully developed intelligence agency. He shows how preparations for the war's turning point-the Normandy landings in 1944-had started at Bletchley years earlier, in 1942, with the careful collation of information extracted from enemy signals traffic. This account reveals the true character of Bletchley's vital contribution to success in Normandy and, ultimately, Allied victory.