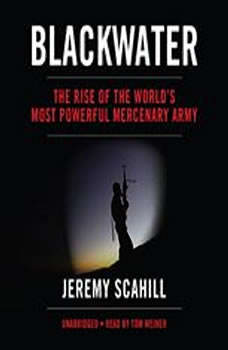 Blackwater: The Rise of the Worlds Most Powerful mercenary Army

It was the Mogadishu moment of the Iraq war. March 31, 2004, four American mercenaries are ambushed in the Sunni hotbed of Fallujah, their jeeps set ablaze with the men inside. An angry mob drags their charred corpses through the streets, hanging them from a bridge over the Euphrates River. Fallujah is the graveyard of the Americans! the mob declares in front of the cameras. The ensuing US slaughter in Fallujah would fuel the fierce Iraqi resistance that haunts US occupation forces to this day. Meet Blackwater USA, the worlds most secretive and powerful mercenary firm and the fastest growing private army on the planet with forces capable of carrying out regime change throughout the world. Blackwater was founded by an extreme rightwing fundamentalist Christian megamillionaire exNavy Seal named Erik Prince, the scion of a wealthy conservative family that bankrolls farrightwing causes.