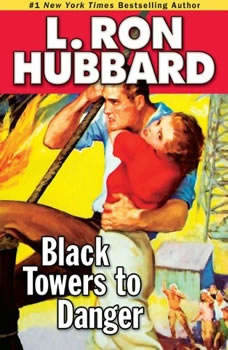 Drilling for oil is a dirty business, and for Bill Murphy, it?s about to turn positively filthy. But Murphy?s as big and tough as his home state of Texas?a man in the mold of a young John Wayne?and he?s more than a match for everything the oil-rich land of Venezuela can throw at him. Everything, that is, except for one woman . . . Her name is Marcia Stewart. She?s fiery, she?s brave, and she?s beautiful . . . and she?d like nothing better than to see Bill Murphy dead. Her oilman father?s been killed, and Marcia tags Murphy as the murderer. Murphy?s guilty of a lot of things, but murder?s not one of them. He?s drilling down for the truth, and now it?s his land, his love for Marcia?and his life?that are on the line. With so much at stake, he?ll go to any length to come out on top of the Black Towers to Danger. It?s a gusher! The oil flows, the bullets fly, and the action comes fast and furious as the audio drama of Black Towers to Danger takes you to the heights of adventure. When Black Towers to Danger was first published in 1936, the editor wrote: ?L. Ron Hubbard, as you know, is a pilot, a writer and an engineer. The one thing he doesn?t work at is engineering. He was in China at 15 and has covered a lot of territory since then. If he?s on a flying field?or anywhere else?you can?t miss him?he?s a tall, slender chap with very fair skin and bright red hair. Something picturesque about him as there should be about a flyer.? And not only was he a man with a commanding presence, so too did he have command over his material, researching the entire oil drilling process for this story. Cast: Jennifer Darling, Brooke Bloom, Corey Burton, Bob Caso, R.F. Daley, John Mariano, Jim Meskimen, Enn Reitel, Richard Rocco and Tait Ruppert.

Black Towers to Danger
Stories from the Golden Age