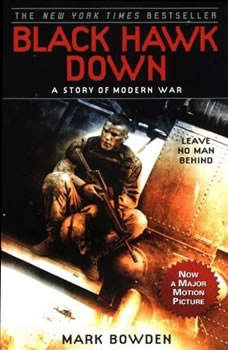 Ninety-nine elite American soldiers are trapped in the middle of a hostile city. As night falls, they are surrounded by thousands of enemy gunmen: Their wounded are bleeding to death. Their ammunition and supplies are dwindling. This is the story of how they got there -- and how they fought their way out.This is the story of war.Black Hawk Down drops you into a crowded marketplace in the heart of Mogadishu, Somalia with the U.S. Special Forces -- and puts you in the middle of the most intense firefight American soldiers have fought since the Vietnam War.Late in the afternoon of Sunday, October 3, 1993, the soldiers of Task Force Ranger were sent on a mission to capture two top lieutenants of a renegade warlord and return to base. It was supposed to take them about an hour. Instead, they were pinned down through a long and terrible night in a hostile locked in a desperate struggle to kill or be killed.When the unit was finally rescued the following morning, eighteen American soldiers were dead and dozens more badly injured. The Somali toll was far worse: more than five hundred killed and over a thousand wounded. Award-winning literary journalist Mark Bowden's dramatic narrative captures this harrowing ordeal through the eyes of the voting men who fought that day. He draws on his extensive interviews of participants from both sides -- as well as classified combat video and radio transcripts -- to bring their stories to life.Authoritative, gripping, and insightful, Black Hawk Down is a riveting look at the terror and exhilaration of combat, destined to become a classic of war reporting.