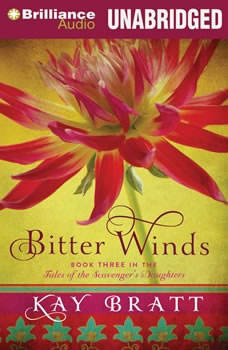 Series: Tales of the Scavenger's Daughters #3

The third audiobook of the Tales of the Scavenger’s Daughters series, Bitter Winds follows the saga of Chinese couple Benfu and Calli, and the abandoned young women in their care.Even after a decade of pain, Ivy remains closely tethered to Lily—her blind twin sister—and haunted by her mother’s admission the night their home burned, almost taking Lily’s life: “I’m sorry. Take care of your sister.” Years later, as Lily begins to navigate the world on her own, the police mistakenly toss the blind girl in a cell, and Ivy realizes she must find her twin at all costs…even if that means risking her own freedom.After Benfu and Calli’s long-lost daughter, Li Jin, finally reunited with her birth parents, she opened a shelter for unwanted children, turning her fortunes from destitution and abuse to family and fulfillment. But her friend Sami remains consumed by bitterness—and Li Jin soon realizes she needs to make a difficult choice between helping someone from the past or nurturing her own future.

Tales of the Scavenger's Daughters Bundle