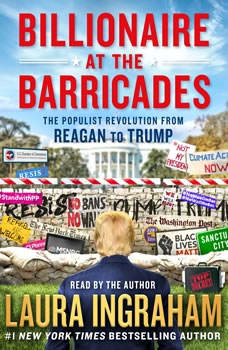 Billionaire at the Barricades: The Populist Revolution from Reagan to Trump

This program is read by the author. Americans didn’t just go to the polls in 2016. They joined a movement that swept the unlikeliest of candidates, Donald Trump, into the Oval Office. Can he complete his agenda? Or will his opponents in the media, protester class, and political establishment block his efforts and choke off the movement he represents?In Billionaire at the Barricades, Laura Ingraham gives readers a front row seat to the populist revolution as she witnessed it. She reveals the origins of this movement and its connection to the Trump presidency. She unmasks the opposition, forecasts the future of the Make America Great Again agenda and offers her own prescriptions for bringing real change to the swamp of Washington.Unlike most of her media colleagues, Ingraham understood Trump’s appeal and defied those who wrote his political obituary. Now she confronts the president’s critics and responds to those who deny the importance of his America First agenda. With sharp humor and insight she traces the DNA of the populist movement: from Goldwater’s 1964 campaign, to Nixon’s Silent Majority, to Reagan’s smashing electoral victories.Populism fueled the insurgency campaigns of Buchanan and Perot, the election of George W. Bush, and the Tea Party rallies of the Obama presidency. But a political novice—a Manhattan billionaire—proved to be the movement’s most vocal champion. This is the inside story of his victory and the fitful struggle to enact his agenda.