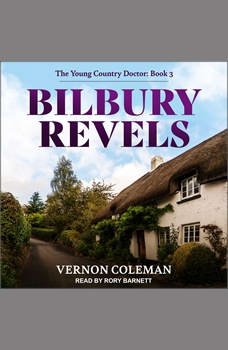 Bilbury Revels is the third in the Young Country Doctor series of books and continues the account of the doctor and his young wife, Patsy, who are settled happily at Bilbury Grange. Disaster strikes during a long, relentless storm which batters the village and blankets the whole area in a thick covering of snow. The doctor nearly loses his life, and the village schoolteacher loses her cottage roof. The excitement really starts when the villagers join together to raise money to repair the devastated cottage. Vernon Coleman describes an old fashioned music hall evening (during which just about everything that can go wrong goes wrong), and one of the funniest cricket matches ever described is reported in Chapters 16 and 17. There is also a village produce show where the locals compete to find out who has grown the biggest and best vegetables. And, as if all that were not enough, the doctor has to promote his first book. He travels to London, makes his first (and hilarious) television appearance, and is invited to speak at a local village hall where things don't go entirely to plan.