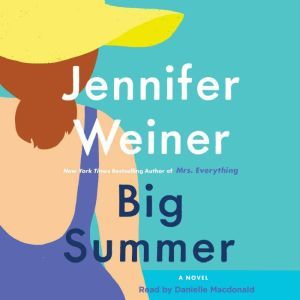 Named a Most Anticipated Book of 2020 by Literary Hub, PopSugar, LibraryReads, Booklist, and Library Journal “Big Summer is the perfect beach read.” —PopSugar “Friendship, weddings, and rich people being weird? Obviously I am in.” —Literary Hub “If you love Jennifer Weiner, you’ll love this one.” —Kirkus Reviews, starred review The #1 New York Times bestselling author of the “nothing short of brilliant” (People) Mrs. Everything returns with an unforgettable novel about friendship and forgiveness set during a disastrous wedding on picturesque Cape Cod.Six years after the fight that ended their friendship, Daphne Berg is shocked when Drue Cavanaugh walks back into her life, looking as lovely and successful as ever, with a massive favor to ask. Daphne hasn’t spoken one word to Drue in all this time—she doesn’t even hate-follow her ex-best friend on social media—so when Drue asks if she will be her maid-of-honor at the society wedding of the summer, Daphne is rightfully speechless. Drue was always the one who had everything—except the ability to hold onto friends. Meanwhile, Daphne’s no longer the same self-effacing sidekick she was back in high school. She’s built a life that she loves, including a growing career as a plus-size Instagram influencer. Letting glamorous, seductive Drue back into her life is risky, but it comes with an invitation to spend a weekend in a waterfront Cape Cod mansion. When Drue begs and pleads and dangles the prospect of cute single guys, Daphne finds herself powerless as ever to resist her friend’s siren song. A sparkling novel about the complexities of female relationships, the pitfalls of living out loud and online, and the resilience of the human heart, Big Summer is a witty, moving story about family, friendship, and figuring out what matters most.