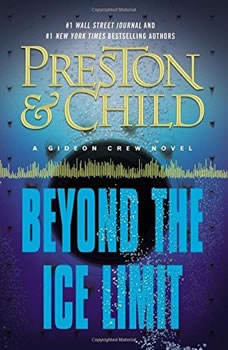 Beyond the Ice Limit: A Gideon Crew Novel

BEYOND THE ICE LIMITThat thing is growing again. We must destroy it. The time to act is now...With these words begins Gideon Crew's latest, most dangerous, most high-stakes assignment yet. Failure will mean nothing short of the end of humankind on earth.Five years ago, the mysterious and inscrutable head of Effective Engineering Solutions, Eli Glinn, led a mission to recover a gigantic meteorite--the largest ever discovered--from a remote island off the coast of South America. The mission ended in disaster when their ship, the Rolvaag, foundered in a vicious storm in the Antarctic waters and broke apart, sinking-along with its unique cargo-to the ocean floor. One hundred and eight crew members perished, and Eli Glinn was left paralyzed.But this was not all. The tragedy revealed something truly terrifying: the meteorite they tried to retrieve was not, in fact, simply a rock. Instead, it was a complex organism from the deep reaches of space.Now, that organism has implanted itself in the sea bed two miles below the surface-and it is growing. If it is not destroyed, the planet will be doomed. There is only one hope: for Glinn and his team to annihilate it, a task which requires Gideon's expertise with nuclear weapons. But as Gideon and his colleagues soon discover, the "meteorite" has a mind of its own-and it has no intention of going quietly...

Beyond the Ice Limit: A Gideon Crew...
Gideon Crew Series