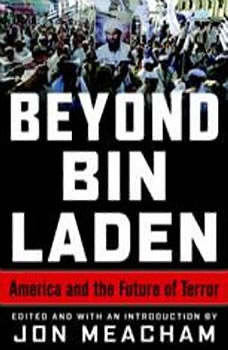 Beyond Bin Laden: America and the Future of Terror

Osama bin Laden was the most wanted man in American history—an enemy who brought the United States what President George W. Bush called “a day of fire,” and ushered in a new era of terrorism. It took a decade of blood and sacrifice, of determination and frustration, but finally, in a nighttime raid at the end of a dirt road in Pakistan, the hunt for Bin Laden ended with a gunshot. It was a dramatic climax to a long and painful chapter.

But now what? The terrorist threat that has defined American policy since the attacks of 9/11 did not die with Bin Laden in his walled compound near Islamabad. Radicals still wish us harm, and we must fight on.

In this provocative collection of essays edited and introduced by Pulitzer Prize winner Jon Meacham, a group of penetrating analysts and leaders look ahead to the world after Bin Laden—to the future of Al Qaeda, of Afghanistan, of Pakistan. We explore the political, military, and cultural implications of the post–Bin Laden war on terror. From Richard N. Haass of the Council on Foreign Relations to former Secretary of State James A. Baker III, from historian and journalist Evan Thomas to former U.S. Army officer Andrew Exum, Beyond Bin Laden gives listeners intelligent, deeply informed, and urgent glimpses of what comes next.

Beyond Bin Laden is read by Gayle Humphrey and Eric Conger.

The explosive first-hand account of America's secret history in Afghanistan With the publication of Ghost Wars, Steve Coll became not only a Pulitzer Prize winner, but also the expert on the rise of the Taliban, the emergence of Bin Laden, and the s...

THE DEFINITIVE BOOK ON ISISJay Sekulow, one of America’s most influential attorneys, closely examines the rise of the terrorist groups ISIS and Hamas, explains their objectives and capabilities and how, if left undefeated, their existence coul...

THE NEW YORK TIMES BESTSELLERThe explosive memoir of a Muslim American FBI agent fighting terror from the inside.It’s no secret that federal agencies are waging a broad, global war against terror. But for the first time in this memoir, an acti...

A sweeping narrative history of the events leading to 9/11, a groundbreaking look at the people and ideas, the terrorist plans and the Western intelligence failures that culminated in the assault on America. Lawrence Wright’s remarkable book i...

In the dark days immediately after 9/11, the CIA turned to Dr. James Mitchell to help craft an interrogation program designed to elicit intelligence from just-captured top al-Qa'ida leaders and terror suspects.  A civilian contractor who h...

It IS About Islam
by Glenn Beck

#1 bestselling author and radio host Glenn Beck exposes the real truth behind the roots of Islamic extremism in Muslim teaching in this sharply insightful audiobook that debunks commonly held assumptions about Islam and the dream of a renewed caliph...

In this New York Times bestselling investigation, Ted Koppel reveals that a major cyberattack on America’s power grid is not only possible but likely, that it would be devastating, and that the United States is shockingly unprepared.   Im...

The heartbreaking and inspiring story of one of America's deadliest battles during the war in Afghanistan, acclaimed by critics everywhere as a classic. *Soon to be a major motion picture from Millennium Films*At 5:58 AM on October 3rd, 2009, Comba...