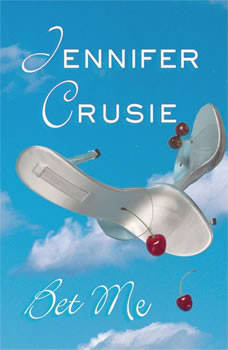 Min Dobbs knows that happily-ever-after is a fairy tale, especially with a man who asked her to dinner to win a bet. Cal Morrisey knows commitment is impossible, especially with a woman as cranky as Min Dobbs. When they say good-bye at the end of their evening, they cut their losses and agree never to see each other again. But Fate has other plans, and it’s not long before Min and Cal are dealing with a jealous ex-boyfriend, Krispy Kremes, a determined psychologist, chaos theory, a mutant cat, Chicken Marsala, and more risky propositions than either of them ever dreamed of including the biggest gamble of all—real love.

If you enjoyed Crusie's other books, this one follows suit. The overweight girl, the beautiful man she is chasing and the girl talk that goes on just long enough to get annoying. It kind of left me saying ehh, it was ok.

I thought this was one of Ms. Crusie's better books. I have gone back and reread this one several times. I loved how fate was always trying to get the two lead characters together.